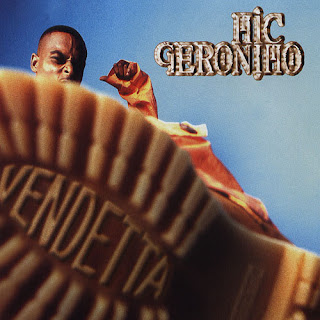 Back in '95, Mic Geronimo served up a fine treat for purveyors of street life with his debut opus, The Natural. Eloquently covering everything from the swank euphoria of herbal tree consumption (memorably chanting 'I'm so high/You so high/I be gettin' money till the day that I die' on "Masta I.C.") to the oft-sullen trials of inner-city courtship ("Sharane") with overtly serene and straightforward rhymes that, while low on discord, spoke volumes to sleep-eyed denizens of AnyGhetto, USA.

Now a couple of years later, you're hyped around the release of Mic's follow-up offering, Vendetta. And upon listening to the album, it's a safe bet to say that you might be disappointed. There's Puff blasting his one-station, Bad Boy boombox all over your boy's neighborhood on the lyrically-gritty, but pop-ish "Nuthin' Move But The Money," while the uninspired "Unstoppable" and sluggish title cut, both could've left on the cutting room floor. Then too, the soundscape for Vendetta, with long-winded and simple drum patterns and catchy themes, are too designed for crossover appeal. Indeed, only the impassioned, Buckwild-produced "How You Been", which sees Mic deliver a heartfelt ("Pray alone inside a stone-cold confusion and weep/but only your touch can bring me to peace") tribute to his mother and the requisite, but still jaunty posse-cut "Usual Suspects" save the album from complete and utter repetition.

"Everybody want to be like Mic," boasts the hook on "Be Like Me". But Vendetta isn't as much Mic as it is an A&R's wet dream. It's all about the cheddar, but at what cost?

The edited version of this review was published in the January 1998 issue of Rap Pages.